Upright pianos built early in the last century which have brass rails and flanges are by this time often having problems which necessitate repair. Breakage of any of the component parts of a brass rail system will result in notes being put out of commission. If the brass rail / flange system of your upright piano has reached the point where problems have begun to occur, repairs will be necessary if the piano is to be enjoyed without the inconvenience of notes which suddenly stop working. 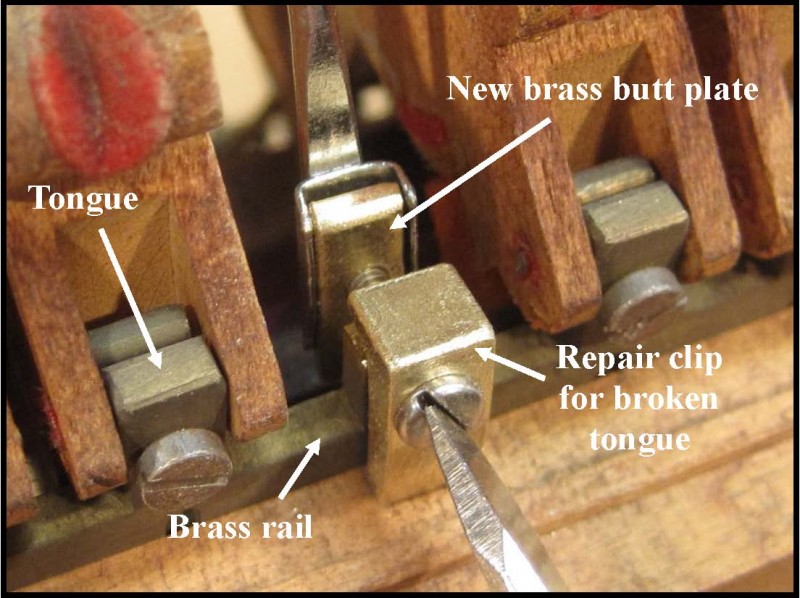 Repair being made to broken brass rail.

What exactly is a brass rail, how does it work, and why do things go wrong?

In a piano action with a brass rail each hammer assembly (consisting of a hammer, hammer butt and hammer shank) pivots on a brass center pin held in place between a ‘tongue’ of the brass rail itself, and a small rectangular brass part called the butt plate. When everything is in good condition this system works very efficiently, with hammers tracking straight and true.

Unfortunately, both the tongues of the brass rail itself and the brass butt plates are eventually susceptible to metal fatigue—although it often takes a century or so for problems to develop. Breakage is most likely to occur at the screw holes drilled into the brass butt plates and the tongues alike, and also at the channel in each tongue which allows room for the center pins. When a break does occur, the corresponding hammer butt no longer is held in check and the note quits working, making repair work necessary (see photo above).

What is the most common problem to occur with a brass rail assembly? 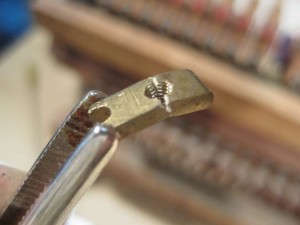 Oftentimes, brass rail pianos will first begin to have problems with brass butt plates breaking. Fortunately, this is a relatively easy problem to diagnose and repair.

When a butt plate breaks, the break is nearly always in line with the threaded hole which is intended for a machine screw to affix the butt plate to a tongue of the brass rail. Typically, the break begins as a hairline crack (signaled by a loose or wobbly hammer assembly). When the break is complete, the hammer is no longer held in place. 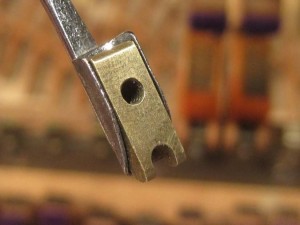 To insert a new butt plate (or plates), a special insertion tool is used to hold the small part in place while the machine screw is inserted through the tongue and into the plate. (Note: The action must be removed so that the replacement may be done from the back side of the action). 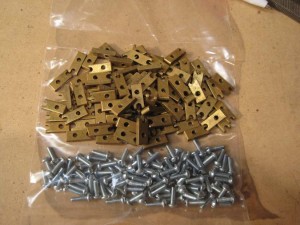 If more than a couple of brass butt plates have broken or if a number of wobbly notes are discovered (an indicator of future breakage), the most sensible repair would be to replace the complete set of butt plates while the action is out of the piano. Once done this problem area would be taken care of for the foreseeable future.

If a tongue of the brass rail itself is broken, is it possible to fix it? 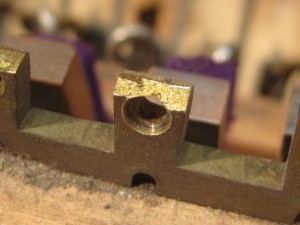 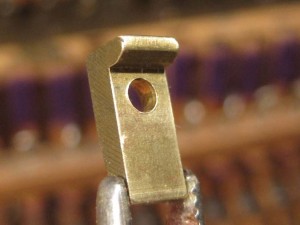 Yes. Each tongue of a brass rail has a channel which keeps the center pin of the hammer butt in place. If that’s where the break has occurred, a repair clip may be installed which takes the place of the upper portion of the channel. In the photo to the left, the bottom half of the channel (facing away from the camera) is still intact. The brass repair clip shown in the photos below will be used to make the tongue functional once again. 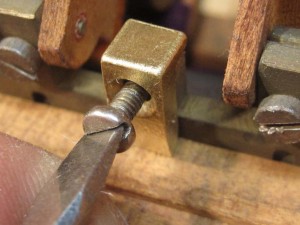 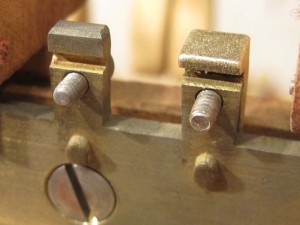 When the screw is pushed through the clip and the remaining portion of the tongue (above photo), the profile on the opposite side matches an unbroken tongue (right photo). Each screw will be driven into a brass butt plate. Before the plate is tightened down, the center pin of the corresponding hammer butt will be slipped into place in the channel provided. Note: If a number of tongues are broken, a more appropriate repair might be the duplication and replacement of the entire brass rail.

What if the tongue breaks at the screw hole, instead of along the channel? 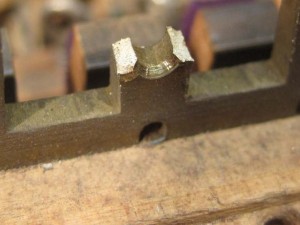 A special brass repair clip is used in this situation which replaces both sides of the channel. It also features a wider base for additional stability, since the original screw hole isn’t completely intact. 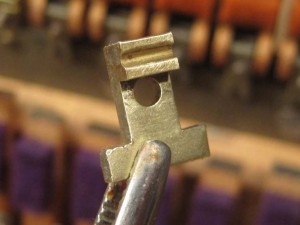 With the clip in place, and the screw inserted, a new butt plate is held in place with an insertion tool. 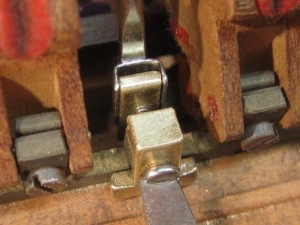 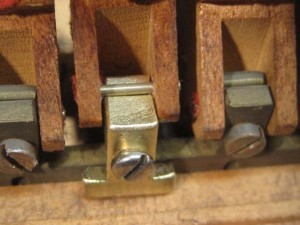 Before the butt plate is drawn down tight, the center pin of the corresponding hammer butt is slipped into place (right photo). Once in place, the plate screw is tightened down. As long as the stub of the tongue is solid, this will be a permanent repair to the action.

Is this work that con be accomplished onsite, or is it necessary the repairs be done in the workshop? 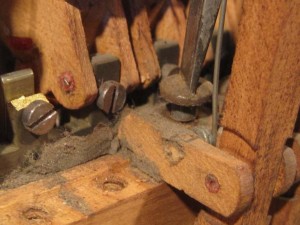 That depends on the severity of the problem. If just one or two butt plates are to be replaced, that can be accomplished by removing the action, doing the replacement onsite, and then reinstalling the action. If a more thorough job is to be done, it would be better to take the action to the workshop. While the action is on the bench, the dampers (and hammer assemblies if needed) can be removed to facilitate repair work and to allow for a thorough inspection of the entire brass rail / flange system. 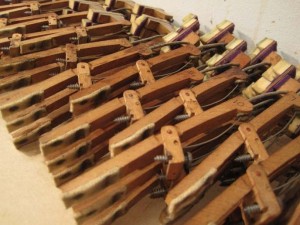 With the adjacent parts out of the way (right photo), and the accumulation of dust removed (below photo) the individual tongues and butt plates may be carefully inspected for hairline cracks.  Note: If upon inspection the replacement of the brass rail seems advisable, the owner would be consulted. 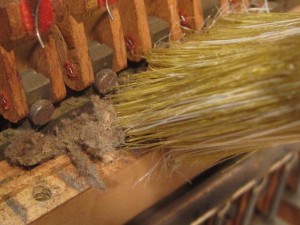 While the action is in the workshop, it would also be the ideal time to perform any other overdue maintenance work. If the hammers need to be filed or replaced, for example, or a new set of bridle straps is called for, this would be the perfect time to have that work scheduled as well. With your piano action rejuvenated and reinstalled in your piano, you would be able to more fully enjoy your instrument once again. 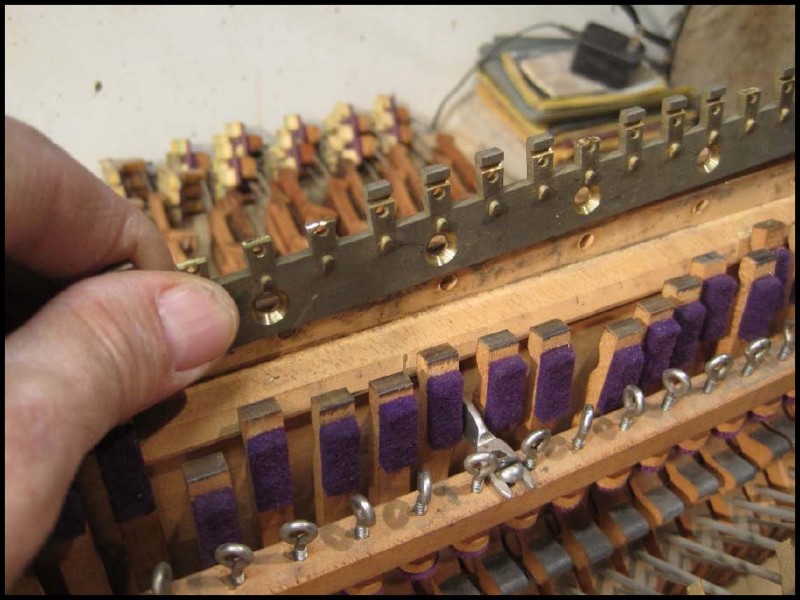 Brass rail with multiple problems being removed for duplication.